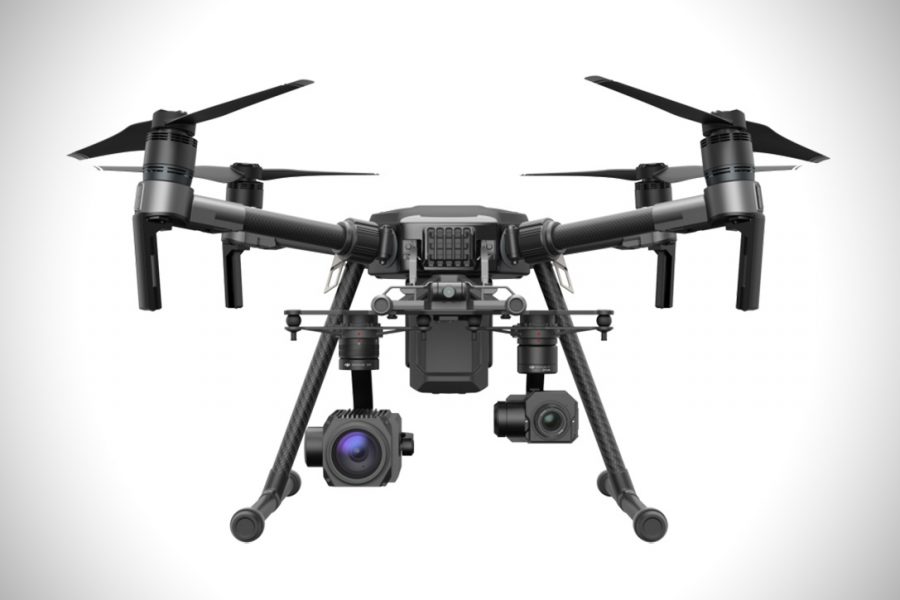 DJI has just announced a new drone as part of their professional Matrice range aimed squarely at the land mapping, surveying, and industrial inspection sectors.

The Matrice 200 fills a gap in DJI’s lineup. This is a a drone that finally address the specific and specialised needs of the construction, surveying and inspection industries. There are actually there variants in the Matrice 20o range, each with additional payload features designed to address specific needs:

The base Matrice 200 has a single underslung camera mount, typical of most drones such as the Inspire series. The Matrice 210 has three gimbal (camera mount) variations:

There’s also a Matrice 210 RTK variant. It has the same options as the 210 above but with the added benefit of built-in RTK for additional survey precision and data accuracy.

The 200 series can carry all of DJI’s more recent drone-mounted cameras, including the Zenmuse X4S, Zenmuse X5S, Zenmuse XT thermal camera, and the Zenmuse Z30 30x zoom camera. The aircraft also comes with the same obstacle avoidance and terrain sensing technology found in the Inspire 2 and the Mavic with a total of 7 sensors and systems.

The Forward Vision System is capable of detecting obstacles up to 30 meters ahead, while upward facing infrared sensors can sense obstacles within a 5-meter range. A downward facing vision positioning system enables precision hovering and landing, plus the Matrice 200 incorporates the same FPV camera found on the Inspire 2 for added peace of mind no matter which direction the main payload camera is facing.

The aircraft is fully weather sealed and rain resistant (though not waterproof), can operate in extremes of temperature down to sub-zero conditions, and has a built-in battery warming system to keep batteries at the optimum temperature.

The Matrice 200 utilises the same dual-battery system found on the Inspire 2 series, allowing for power redundancy, as well as built in battery warming for extreme cold environments.

Flight times will be between 17 and 35 minutes, depending on the payload (or payloads) fitted, and the entire system folds down into its own custom-designed case for easy storage and deployment.

In addition, the M200 Series will be the first commercially available drone with an ADS-B receiver. This module enhances airspace safety by automatically providing the operator with real-time information about nearby manned aircraft, enabling operations where teams rely on mixed aircraft, and will be integrated into DJI’s new AirSense technology as it becomes available.

Pricing and availability are yet to be announced. All we know right now is that the range will be available some time in the second quarter of 2017.

Here at Dronesurvey, we will most likely be acquiring one or two Matrice 210’s in the very near future for evaluation and testing. Check back soon for a more in-depth review.

This site uses Akismet to reduce spam. Learn how your comment data is processed.